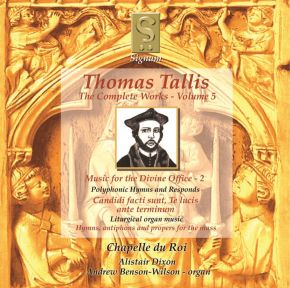 This disc is the fifth in a series of nine that covers Thomas Tallis’s complete surviving output from his five decades of composition. In this disc we continue to explore the choral music of the Divine Office, progressing with the choral hymns and responories not found in volume 4.

Tallis’s written music for the liturgy is modest in style, inventive and very appealing. His surviving output of written keyboard music is very small in light of his reputation. It is possible that much of this written music has been lost, and even more likely that the majority of his keyboard performances were improvised, and therefore not strictly notated. This CD offers reconstructions based on what is known of liturgical practice at the time when this music was most probably written (the later years of Henry VIII and those of Queen Mary I).

Recording the organ works of Tallis involves a number of difficult decisions, not least the choice of organ, as there are no surviving English organs from the sixteenth century. The organ in the late medieval private chapel of Knole, a vast country house in Kent, is arguably the oldest playable organ in England. It’s joints can sound rather rattley, and it has some trouble breathing at times (although the regular creak of the bellows being pumped by foot is a reassuring link with the pre-electric past). However, the sound of this organ in the Knole chapel acoustic might not be far off from what Tallis knew from inside the Chapel Royal.

Once again Chapelle du Roi presents an inspired and historically informed performance of the sacred renaissance repertoire for which they are celebrated.