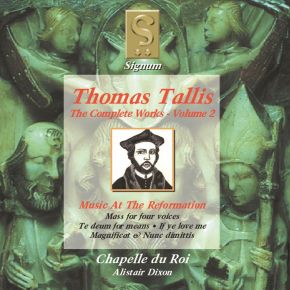 This album is the second in a series of nine covering the complete works of Thomas Tallis (c.1505-1585).

As the 1540s developed, the Reformation began to take hold and the style of music required from composers such as Tallis altered radically. The large-scale melismatic votive antiphons (for example those on disc 1) were no longer required; the emphasis moved away from Marian devotion to a more syllabic and compact style and, eventually, to settings of English rather than Latin texts. Disc two traces this development from the Jesus antiphon Sancte Deus, to the mass for four voices, the three early English anthems including If ye love me, the Te Deum for meanes and the Elizabethan Magnificat and Nunc dimittis.