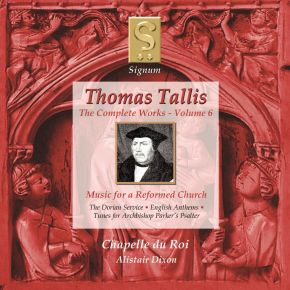 Chapelle du Roi devote this latest volume to music which was composed by Tallis for use during the reformed services announced in The book of the common prayer which came into effect on Whitsunday (9th June) 1549. Tallis’s music, together with the associated intonations and Collects (for Easter Day at Mattins and for Christmas Eve), is presented for this recording in the normal liturgical sequence for the day; Mattins, Holy Communion, and Evensong. The recording concludes with Tallis’ nine psalm-tune harmonisations which he contributed to Archbishop Matthew Parker’s Psalter, published in 1567.

Chapelle du Roi give an inspired and historically informed performance of the sacred renaissance repertoire for which they are celebrated.