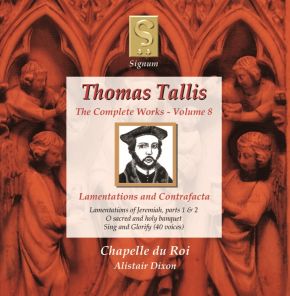 This volume brings together Tallis’s two masterly settings of the Lamentations of Jeremiah and English adaptations of several of his best-known Latin motets.

Thomas Tallis was one of many continental and English composers who composed settings of texts from the Lamentations of Jeremiah, the opening five verses of which formed part of the office of Matins (or Tenebrae) during Holy Week. Tallis’s two settings could have been performed ritually but in all likelihood they are Elizabethan works intended for use at the private devotions of staunch Catholic sympathisers.

The statutory introduction of the First Book of Common Prayer on Whitsunday, 9th June 1549 precipitated an urgent need for a repertory of service music in the vernacular. One straightforward solution to the predicament was to adapt existing Latin motets to English texts, a genre of composition that has come to be known as a contrafactum. Contrafacta survive of liturgical music by pre-Reformation English composers as well as by several composers whose working life spanned the period of Reformation.

During the Elizabethan and Jacobean periods contrafacta and their models assumed several forms of dual existence, and were performed not only within a liturgical setting but also in a domestic context for recreation or private devotion. Usually there is no textual relationship between the model and the contrafactum. Indeed the finale of this disc, Sing & Glorify heaven’s high majesty, an adaptation of Tallis’s celebrated eight-choir (40-part) motet Spem in alium was adapted to celebrate Prince Henry’s investiture as Prince of Wales in 1610.