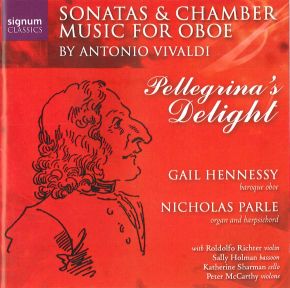 Pellegrina’s Delight celebrates Vivaldi’s contribution to oboe repertoire in the early eighteenth century. Vivaldi wrote at least 16 concerti for solo oboe, but in this recording we offer an overview of Vivaldi’s prominent use of the solo oboe in his chamber music. The disc also provides a fascinating illustration of Vivaldi’s stylistic development between c.1705 and c.1720.

The Quartet Sonata in C major (RV 779) was written during the first decade of Vivaldi’s activity as a composer, when he was serving as a violin teacher at the Ospedale della Piet in Venice. Selected girls were admitted - after audition - to the musical establishment. Vivaldi made a note in this manuscript of the names of the four female musicians who were chosen to perform the sonata. They are Pellegrina (oboe), Prudenza (violin), Lucietta (organ) and Candida (chalumeau).