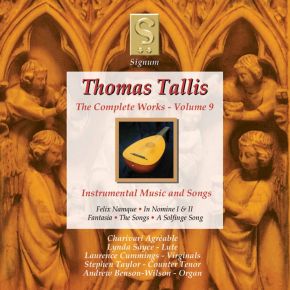 The final release explores the most obscure and enigmatic corner of Tallis’s output – his secular music. His profession as church musician and member of the Chapel Royal did not require him to write secular songs or pieces, yet some works may have been written for the Tudor court. Other works are thought to have been written for generations of choir boys, who were assisted with their training by the composer. Plays and performances outside of the choirboy’s obligation were popular, as well as instrumental consort music and keyboard pieces associated with their training. Tallis is likely to have been given the opportunity to write his secular works for these occasions.

Tallis’s music was admired and used by others far beyond the Chapel Royal and the court. Some of his intended sacred choral works are included on this recording in other guises, arranged by musicians with performance intentions very different to that of the church. His reputation of greatness amongst his friends and contemporaries is reflected in William Byrd’s elegy Ye sacred muses, where he echoes the sentiments of others with the words "Tallis is dead, and Music dies". This musical tribute has justifiably become one of Byrd’s most popular works.

Volume 9 of The Complete Works is a double CD release, marking the end of this popular series. Alistair Dixon has realised the project, and directed his choir Chapelle du Roi throughout the earlier volumes. Musicians featured on this final disc are: Andrew Benson-Williams (organ), Laurence Cummings (virginals), the ensemble Charivari Agréable, Lynda Sayce (lute), and Stephen Taylor (counter tenor)