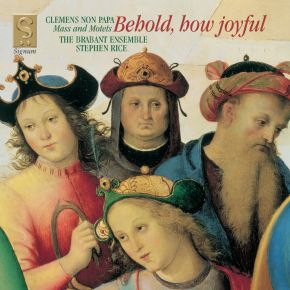 Like many of even the most prolific and celebrated composers of the sixteenth century, Jacobus Clemens non Papa (‘not the Pope’) has offered the history books little factual material with which to work. In contrast to the paucity of biographical material, however, many sources of Clemens' music survive. Indeed, he is one of the most widely published musicians of the entire century with fifteen Masses, over two hundred motets, many Dutch psalms and French chansons to his name.

This disc features the Mass Ecce quam bonum, which is based on Clemen’s own motet setting of Psalm 133, ‘Behold, how good and joyful a thing it is: brethren, to dwell together in unity!’

Apart from that on which the Mass setting is modelled, all of the motets on this disc are in five parts, although their textures are varied. Pascha nostrum sets the text of the Easter Anthem. The Song of Song’s motet Veni electa mea is highly characteristic of mid-sixteenth century spirituality, with the eroticism of the Song of Songs harnessed to provide a metaphor for the Church as bride of Christ. Accesserunt ad Jesum introduces Jesus’s admonition to the Pharisees concerning the estate of marriage. In Job tonso capite, a highly emotive narration of Job accepting his many trials, Clemen’s delivers an immediate approach to word-painting.

The final piece on this disc, Carole, Magnus eras is a secular work: a state motet addressed to the Holy Roman Emperor Charles V and his son, Philip II of Spain. Since the text celebrates the achievements of the Emperor but promises even greater things under his son, it was probably composed at the time of Philip’s investiture as Regent of the Low Countries in 1549.