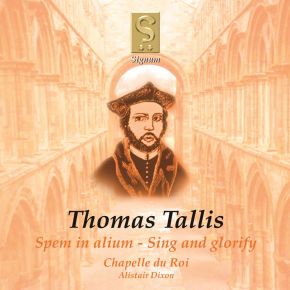 Spem In Alium - Sing and Glorify

Spem in alium is surely not just the greatest of all Thomas Tallis’ musical achievements, but one of the great musical compositions of all time. Writing for 40 independent voices, Thomas Tallis created a noble and imaginative masterpiece.

The earliest surviving manuscript of this great work, the Egerton manuscript, is laid out with an English rendition, Sing and glorify heaven’s high majesty. The English words are not a translation of the Latin, but a new poem written as a syllable-for-syllable replacement.

The new editions of both these works were launched by Chapelle du Roi at a concert at St.John's Smiths Square in 2001 before being recorded for Signum Records. Until then Sing and Glorify had not been performed in this country for more than twenty years, since the evening before the wedding of Prince Charles to Lady Diana Spencer.