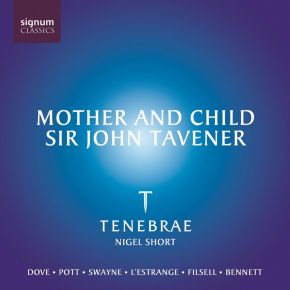 Tenebrae has, in its short existence, made a considerable impact with fresh and vital re-interpretations of classic works in the choral repertoire. On this new recording, innovatory and lesser-known repertoire is drawn from contemporary sources, reflecting an exploratory approach which places the group artistically at the cutting edge.

This is a distinctive and distinguished collection of works by a number of living composers, many of whom have established themselves at the creative forefront of the choral scene in recent times.

Five of the tracks are world premier recordings:

The centre-piece of the disc is a new commission - Mother and Child - by Tenebae from the world acclaimed composer Sir John Taverner.

The universal aspect of motherhood is an idea to which Tavener has returned again and again in his music. Behind this concept lies that of infinite theophanic light, an idea common to all religious traditions. Tavener’s music here interpolates a poem by Brian Keeble with Greek and Sanskrit quotations, the latter in a climactic outburst. The music, having grown in crescendo, is joined by massive organ chords and develops to become an overwhelming pulsating texture at the climax, with awesome strokes sounded on a large Hindu temple gong. The clamour dissipates at the final invocation, ‘Hail Maria’, which is prayerful and contemplative.