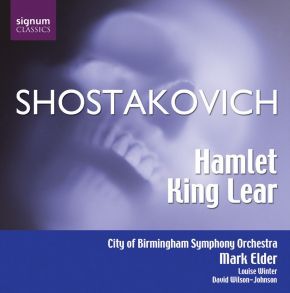 In his youth Shostakovich devoted much time and energy to composing for the theatre and the cinema, writing for an astonishing variety of movies, political plays, satires, the music-hall and the ballet.

The music for Nikolai Akimov’s outrageous and scandalous production of Hamlet was composed in the winter of 1931 – 1932. Akimov had decided that tragedy was irrelevant to the modern Soviet audience, and therefore presented the play as a satirical farce in which the play was turned up-side-down, by reversing all the usual assumptions about the plot and how it should be acted. The alterations to Shakespeare’s work are reflected in the titles of several of Shostakovich’s numbers. He was asked to provide music for scenes that Shakespeare only refers to but which Akimov insisted on representing on stage, for example the feast where "funeral baked meats did coldly furnish forth the marriage tables". The overall character of Shostakovich’s music is often abrasive and satirical, and flippant just where we would expect the music to be more serious. There are also some funny moments, with particular sharp parodies of various well-known musico-theatrical clichés.

In 1954 Kozintsev had also attempted to direct a staged version of Hamlet. For this occasion he decided to reuse music that Shostakovich had already written for him to use in a staged production of King Lear in 1941. All that Kozintsev asked Shostakovich to add for the 1954 Hamlet were a Gigue and a Finale, both of which are included on this recording as an appendix to the music for Akimov’s 1932 production.

The music that Shostakovich wrote for Kozintsev’s 1941 King Lear production inhabits a strange and transitional world, halfway between the bright and brilliant sarcasm of the music for Akimov’s Hamlet of ten years earlier and the more soberly functional manner of his post-war theatrical music. Gone is most of the cheekiness, the fondness for the experimental and the grotesque. There is much in this often oppressively dark music that is characteristic of what was by now Shostakovich’s public symphonic manner.
Perhaps the most powerful and unusual part of the score is the bizarre cycle of Fool’s songs, with which the Fool mocks the mistakes of his master, the King, in the course of the first three Acts. The music of these songs is as strange and quirky as the words they set. Taken as a whole, these ten songs make up a miniature cycle of sourly absurd, almost expressionistic outbursts for voice and orchestra.