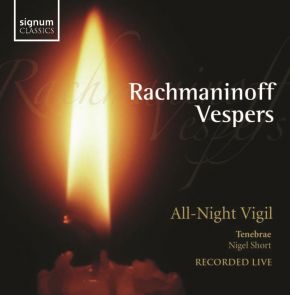 The recording was made live at the North Wales International Music Festival in conjunction with Boosey & Hawkes, Music Publishers Ltd.

The roots of the Russian Orthodox Church are traceable back into the Third Century A.D. Whilst Western forms of Christianity continued to evolve, the Orthodox tradition has been preserved largely intact since the 11th Century, despite persecution of the Church under an intolerant Communist regime in Russia.

The music of the Russian Orthodox Church features vocal chants, the oldest of which is known as znamenny (from the Slavonic znamia meaning “sign”). The melody of this chant is extremely simple, and whilst other composers added their characteristic harmonic effects, Rachmaninoff consciously preserved the modal purity of the original in his setting of the Vespers.

The all-night vigil is celebrated on the eve of the main feasts of the Orthodox Church. Originally it lasted all night and consisted of three separate services to celebrate the beauty of the setting sun, and to reflect on the spiritual light of Christ as the new light of the coming day and the eternal light of heaven.

Rachmaninoff’s setting of the vigil was written in 1915, in the middle of the First World War. He has used authentic znamenny chant in seven movements, with two movements employing Greek chants.

“Even in my dreams I could not have imagined that I would write such a work” Rachmaninoff told the singers at the first performance in March 1915.

The work is dedicated to the scholar Stephan Vasilevitch Smolensky who introduced Rachmaninoff to the repertoire of the church, however the composer’s inspiration was as much politically motivated as spiritually – the composition was a powerful affirmation of nationalism during the war.

Tenebrae characteristically create an atmosphere of spiritual and musical reflection at their performances, using candlelight and movement within ecclesiastical venues.