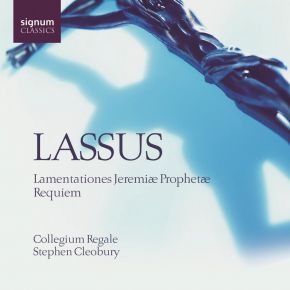 During the last twenty years of his life, Orlande de Lassus was the most celebrated composer in Europe. From the time that he took up the duties of maestro di cappella in the Court of the Duke of Bavaria at Munich, he began to be called 'prince of musicians' and 'the divine Olrande'. The pieces selected for this recording represent Lassus' treatment of the theme of dealth during the mature period. The first group considered the death of Christ: second, the death of a christian.

"It is traditional to perform the Lamentations of Jeremiah the Prophet during Holy Week. Here, Collegium Regale, or King's College Cambridge minus the trebles, sings the version by Roland de Lassus in exquisitely indulgent slow moving five-part counterpoint, milking delicious penitence from every line. No sinner could ignore the culminating solemn call to repent : "Jerusalem convertere ad Dominum." It is incredible to think that these mature vocalists are mere students who must be recycled every three years. The mystery of the choir achieves its gorgeous blend with such transitory, albeit overlapping, personnel." - The Times