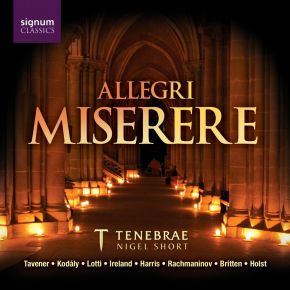 Few can argue with Tenebrae's international stature as one of the most competent, versatile, exciting and passionate vocal ensembles in the world today.

The beauty of Tenebrae's perfectly blended sound coupled with near-flawless technique is showcased in this recording, featuring a selection of their favourite concert repertoire to create a performance worthy of anyone's collection.

Allegri's haunting Miserere is the central point in a journey through music of longing and entreaty, hope and faith. These works spanning the centuries are chosen from the heart of Tenebrae's concert repertoire.

" From choral 'hits' to the less well known, Tenebrae are on top form ... Once again, Tenebrae and their director, Nigel Short, have put together a programme that ranges from the Renaissance to the 21st century, from the neglected to the familiar, with no sense of strain" - Barry Witherden, Gramophone