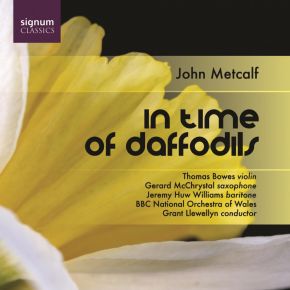 In Time of Daffodils

World renowned Welsh composer, John Metcalf presents his new work, In Time of Daffodils. A song cycle, originally set for voice & piano, Metcalf has extended his own work into an orchestral masterpiece, setting the words of much loved poets to the six concluding songs of the cycle.

Metcalf drew on material from 12 years of creative work to produce the three works which appear on his latest release. Metcalf emphasises the connections in the way the movements were conceived; originating as a whole or in part as works with piano. Metcalf embraced the pan-diatonic or ‘white note’ style when composingParadise Haunts and Three Mobiles encompassing a sense of minimalism in each, yet the movements are both distinctive; Three Mobiles has a larger rhythmic complexity than the more sublime former.

The BBC National Orchestra perform beautifully with Thomas Bowes and Gerard McChrystal interweaving with leading lines on violin and saxophone. The final movement, In Time of Daffodils is a collection of beautiful songs performed by Jeremy Huw Williams, (baritone). The songs are based on texts from 7 poems by poets including William Wordsworth and Amy Lowell, based around the central theme – and emblem of Wales – the daffodil.