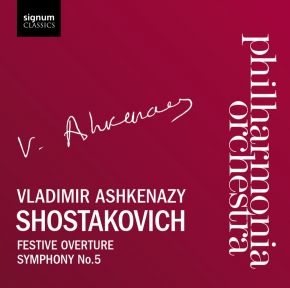 Festive Overture
One of Shostakovich’s most famous works originally composed for a concert to commemorate the 37th anniversary of the October Revolution in 1917.

Symphony No. 5
Its position as one of the 20th Century’s most popular and successful symphonic works is beyond any doubt, the triumph was immediate and greeted Shostakovich’s rehabilitation as a truly great Soviet artist.

The Philharmonia Orchestra is widely recognised as the UK’s finest orchestra with an impressive recording legacy. Vladimir Ashkenazy has a longstanding relationship with the orchestra, and in 2000 he was appointed their Conductor Laureate.