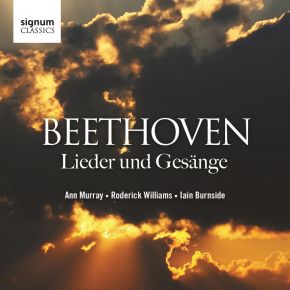 The first in a two part set of Beethoven's Lieder und Gesänge. Beethoven himself was not a keen song writer, yet despite this almost half of his total works call for a voice. This album includes some of the best of those compositions.

Ann Murray has appeared with some of the world's greatest orchestras and conductors, her discography reflects both her broad concert and operatic repertoire and also her great operatic roles.

Roderick Williams is active in the opera house, on the concert platform and in recital, encompassing a repertoire from baroque to world premieres. He has performed with all BBC orchestras and other acclaimed ensembles internationally.

Iain Burnside enjoys a unique reputation as pianist and broadcaster and is most recognised for his collaborations with leading international singers.