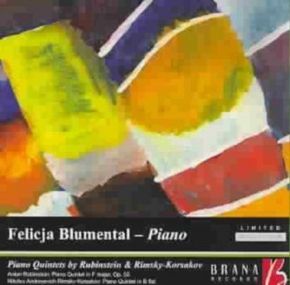 However, Rubinstein was a more cosmopolitan composer and outspoken in his views, seen to antagonise other Russian nationalist composers, namely “The Five” of which Rimsky-Korsakov was a member.

Anton Rubinstein: Piano Quintet in F major, Op. 55
Rubinstein wrote several chamber works: string quartets, violin/cello sonatas and also a Sonata for viola and piano (a particularly valuable piece of repertoire for viola players). His Piano Quintet in F major, Op. 55, dated 1855, is one of two he composed and is written in four movements. Rubinstein demonstrates his expertise in instrumentation, composing melodies that augment the sonorities of each instrument. He partners them with skill, dividing motifs to create contrapuntal themes, writing for the piano as if it were an orchestral part and at other times, as solo instrument shimmering in the background. Like Schumann, Rubinstein wrote predominantly for the piano and at times, this quintet sounds like a concerto for the instrument.

Nikolay Andreyevich Rimsky-Korskov: Piano Quintet in B flat, Posth.
The Piano Quintet by Rimsky-Korsakov has a more traditional feel than that of Rubinstein. It may even come as a surprise that Rimsky-Korsakov wrote chamber music, but when the Russian Musical Society announced a contest for a chamber work in 1876, Rimsky-Korsakov wrote two works, his Sextet For Strings and this quintet. The prize was awarded to a Trio composed by Napravnik and Rimsky-Kosakov’s quintet was overlooked. It is rumoured that Napravnik had the fortune of an excellent sight-reader by the name of Leschetizky to play his work and that Rimsky-Korsakov’s Quintet had a less-capable performer who clumsily struggled through the music. The first movement is similar in style to that of Beethoven’s early compositions. The repetition of its main theme makes this movement particularly memorable. However, it is the melancholic second movement in which Rimsky-Korsakov uncovers his Russian nationalism. The beautiful dance-like third movement is worth the wait. It develops into a more serious section for solo piano, but features some solo passages for the horn, flute and clarinet, interspersed with rippling piano passages. Rimsky-Korsakov also writes a virtuoso moment for the bassoon which previously had a more rhythmic purpose rather than melodic. The wonderful dance theme returns to close.