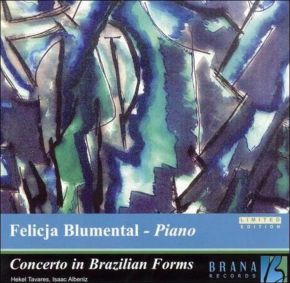 This album presents a rare recording of Hekel Tavares’ Concerto in Brazilian Forms, Isaac Albeniz’s vibrantly percussive Spanish Rhapsody, Op. 70 and ambitious Piano Concerto No. 1 (Concierto fantastico), Op. 78. Hekel Tavares (1896 – 1969) was the son of a wealthly plantation owner and lived close to the land and people of Brazil. He cared more for the evocation of the spirit of national folksong and dance than with their use as melodic material.

Tavares wrote some 100 songs of which Casa de caboclo (published in 1928) was his biggest success.

Between 1949 and 1953 Tavares travelled throughout Brazil collecting folk material for use in his own works. This research found expression in works such as his tone poem O Anhanguera which calls for Tucuna Indian percussion instruments.

The musical skill and mature imagination of Hekel Tavares weld the different ingredients into a thoroughly convincing whole.

Isaac Albeniz
Isaac Albeniz (1860-1909) was born in Spain and at the tender age of nine ran away from home to Puerto Rico. For the next few years he toured Central America and the Western United States and settled briefly in England before studying in Brussels and Budapest.

At the age of thirty-three he retired as a concert performer. This was made possible by the patronage of Francis Burdett Money-Coutts, heir to the banking fortune of Coutts & Co. He devoted himself to revealing the rich resources of the music of his native country through composition.

Forming close ties with Paul Dukas and Gabriel Faure, Albeniz became a cherished member of the French musical community. In his masterpiece, Iberia, he created a source of inspiration the Spanish composers who followed him, as well as for Debussy and Ravel.

As in much of Albeniz’ piano writing, the solo instrument is called on to reproduce percussive rhythmic effects which suggest guitars and castanets.

Isaac Albeniz: Piano Concerto No 1 (Concierto fantastico) Op 70
Albeniz’ first piano concerto, Concierto fantastico is certainly one of his most ambitious projects and perhaps one of his finest achievements. Described as ‘Chopinesque’, it was written in 1886 and is in 3 movements Allegro ma non troppo, Reverie e Scherzo and Allegro.