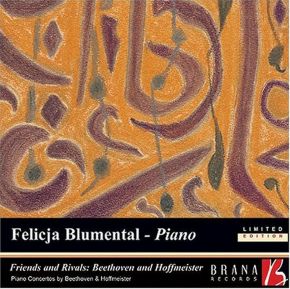 It is noticeable that there are relatively few major works from the first decades of the 19th Century still in the repertoire, and of course Beethoven’s tower over any of them. But although his cantankerous nature was legendary, Beethoven’s disdain for his contemporaries may just have reflected how few composers were attempting to write masterpieces at the time.

In this picture, Franz Anton Hoffmeister (1754-1812) holds an unusual place; a contemporary composer of some note, and one of Beethoven’s publishers. He had come to Vienna to study law, but was so entranced with the musical scene that he took to composing. He subsequently founded a publishing firm, Bureau de Musique, which later became the prominent firm C F Peters.

While it is perhaps no surprise that Hoffmeister’s works have not all survived, it is sobering to recall that a hundred years after the publication of Beethoven’s first piano concerto, neither his works nor those of Bach or Mozart were often played in Vienna (except, as the great pianist Artur Schnabel recalled, “by students and debutantes”). It is unlikely Beethoven will be neglected again, and, fortunately, some artists still seek out those works which have fallen by the wayside, such as Hoffmeister’s Piano Concerto recorded here.

The pianist Felicja Blumental’s repertoire included many lesser known works. Her husband, the art collector Markus Mizne, patiently combed the libraries of Europe in search of neglected and forgotten works for his wife, including Beethoven’s own transcription of his violin concerto, replete with original cadenza. The New York Times said, “the listener cannot help but be grateful to Miss Blumental for going to the trouble of learning all these works and recording them. She is a fine pianist, who gives a clear account of the music.”