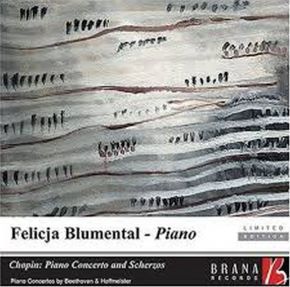 A prolific composer and organist, Naji Hakim is truly one of the most versatile performer-composers working today, garnering praise from his numerous organ and composition competition prizes as well as an award from Pope Benedict XVI for his musical work in benefit of the church.

This new recording with the Danish Chamber Players explores some of Hakim's works for chamber ensemble and organ, with performances from the Th. Frobenius & Sonner Organ of Vangede Kirke, Gentofte, Denmark.

When Fryderyk Chopin wrote his piano concerto in F minor, aged just 19, his two teachers, Zywny and Elsner, had already made their greatest contribution; imbuing him with a profound love and respect for Bach and Mozart, and recognising they could teach him nothing about piano performance. Chopin’s genius was fully formed by childhood.

His two concertos have remained firm favourites with pianists and audiences, the epitome of beautiful melody, yet many of his solo works, nearly all of which are mainstays of the concert program, startled his contemporaries and were frequently misinterpreted throughout 19th Century performance. His four scherzos are perfect examples of the innovation and explosive drama in his compositions that baffled even his supporters.

This contrast perhaps goes to the heart of Chopin’s. His love of opera saw early fruition in the melodic lines of the concertos, after which he saw no need to return to this form. Instead, his extraordinary natural technique gave him the power to experiment beyond any previous pianistic ideas, relentlessly pursuing the contrasting and often anguished themes in his imagination. George Sand recalled her lover spending day after day struggling with the chords of scherzo no. 3, in “this obstinate battleÖto recapture certain details of his composition.”

Chopin’s perfectionism was deliberate, both in his writing and in his obsession with the manner of performance, for above all he strove for the right effect, the essence of what would be heard, to convey his feelings. As Charles Rosen said, “[Chopin’s] music, never calculated, like much of Bach, for solitary meditation, works directly on the nerves of the listener, sometimes by the most delicate and fleeting suggestion, sometimes with an obsessive, hammered violence.”

So here are the two matchless dimensions of Chopin; the almost impossibly poignant, singing melody, and the darker, turbulent creativity of the piano’s solitary perfectionist.