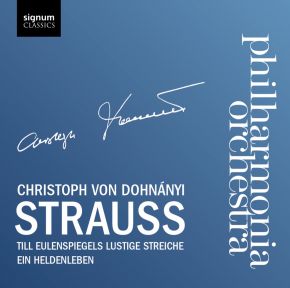 The Philharmonia Orchestra is widely recognised as the UK’s finest orchestra with an impressive recording legacy, with this being their fourth disc with Signum. Christoph Von Dohnányi has been principle conductor for the past 11 years and has recently been made Honorary Conductor for life.

Till Eulenspiegels Lustige Streiche (Till Eulenspiegel's Merry Pranks) is considered to be one of Strauss’s most witty, entertaining and successful tone poems. Ein Heldenleben (A Hero's Life) heralds the composer’s more mature period in this genre, and proved controversial at it's premiere for it's highly auto-biographical nature.