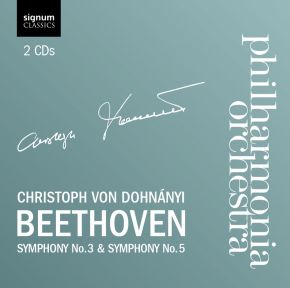 The Philharmonia Orchestra is widely recognised as the UK’s finest orchestra with an impressive recording legacy, with this being their sixth disc with Signum. Christoph Von Dohnányi has been principle conductor for the past 11 years and has recently been made Honorary Conductor for life.   The disc features two crowning achievements of Beethoven’s aptly titled ‘Heroic’ compositional period of the early 19th Century; the Third Symphony (Eroica), and the Fifth Symphony, arguably the single most popular piece of classical music in the Western canon.