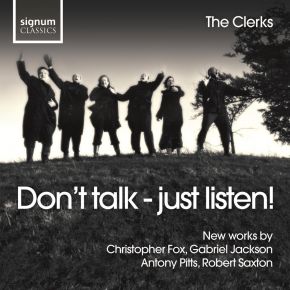 This album presents a selection of works commissioned by The Clerks over the last decade, and is their first devoted entirely to contemporary music. The impulse behind each commission was different, as was the context in which they were first performed; so necessarily this is an eclectic anthology. The works were designed to suit the forces of the group and their ranges and timbres, but more than that, they each represent a fascinating and innocative engagement with the compositional techniques, genres and motivations of late Medieval and Renaissance music - the repertoire on which The Clerks have cut their teeth.