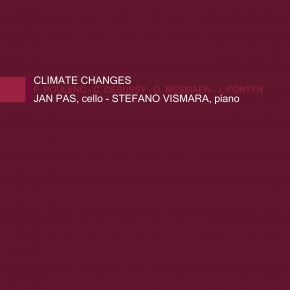 Cello virtuoso Jan Pas is one the best-kept secrets of Belgian classical music. Although he became the cello solo in the Monnaie Opera Orchestra at a prodigiously young age (18), and now plays in the Staatsoper Stuttgart and the Bayreuther Festspielorchester, he has almost no solo recordings to his name. In order to fill this void, the Evil Penguin gave Pas carte blanche to record his repertoire of choice, a challenge he decided to accept with his long-time musical partner, the Italian pianist Stefano Vismara.

Under the suggestive title Climate Changes, Pas and Vismara track the emergence of the new musical language of the 20th century, from Debussy’s monumental Cellosonata (1915), over Messiaen’s and Poulenc’s mid century classics, to the delicately enigmatic Six Climats by Jan Pas’ compatriot Jacqueline Fontyn’s (°1930), which appropriately rounds off the programme by paying hommage to Debussy’s impressionism as well as to Messiaen’s sensitivity and poetry.