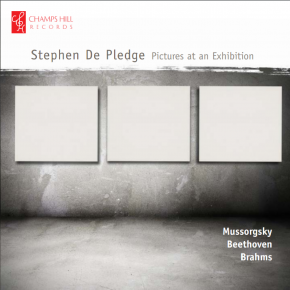 New Zealand pianist Stephen De Pledge is one of the most exciting and versatile musicians of his generation. Stephen's solo performances have taken him throughout the UK, as well as to Hong Kong, Italy, Japan, and the USA. With a far reaching repertoire, he has always been an advocate for contemporary music, and presents here works by Mussorgsky, Beethoven, and Brahms. 'Stunning spring–loaded virtuosity [from] Stephen De Pledge, a New Zealander whose laid-back, let-me-entertain-you manner might have suggested that he took none of this too seriously, except that his technique was as alert and crisp as it was fast and fluent.' Independent on Sunday 'Formidable...left me wanting to hear more.” Sunday Times