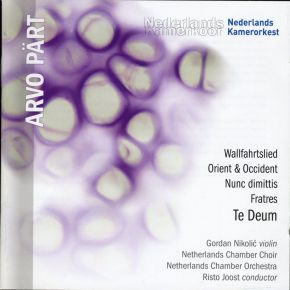 When I heard of the opportunity to make a recording of works by Arvo Pärt with the Netherlands Chamber Choir and the Netherlands Chamber Orchestra immediately all the masterpieces on Arvo Pärt’s list of compositions came to mind, that offer the two groups a chance to show themselves at their best. The Netherlands Chamber Choir regularly sings renaissance and baroque repertoire and since the style in Arvo Pärt’s music is closely connected to the horizontal sense of line in early music, their experience gives the singers a great tool to interpret Pärt’s simple yet vocally challenging music from Estonia. The choral masterpiece Nunc dimittis is surely one of the greatest vocal works Pärt ever wrote.  The Netherlands Chamber Orchestra under the passionate leadership of Gordan Nikoli´c is a great example of a modern chamber orchestra, very capable of performing any music from early baroque repertoire to contemporary music.  The charismatically fiery expression of Gordan Nikoli´c in Pärt’s Fratres gives the piece a unique aura. Orient & Occident is a composition that challenges the orchestra both musically as well as technically, a perfect fit for the NCO. The two groups join together on this CD for Ein Wallfahrtslied, a piece for male choir and string orchestra, and also for the Te Deum for 3 choirs, prepared piano, string orchestra and tape, already an icon amongst Pärt’s compositions.  This recording presents Arvo Pärt’s probably most well known vocal and instrumental works composed from 1992-2000. Al these pieces of music have found their place in the repertoire of the leading vocal ensembles and orchestras in the world.