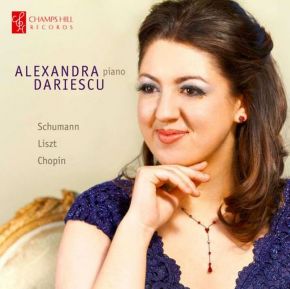 Alexandra Dariescu makes her debut recording for Champs Hill Records in a recital of Schumann, Chopin and Liszt. A hugely popular communicator, Alexandra is a former YCAT artist, a Laureate of the Verbier Academy and has been awarded the Romanian Ambassador's prize

All three composers on this album contributed to the foundations and development of Romantic piano composition, and this set of works forms one of Alexandra's most popular piano recital programmes.

Schumann published his Opus 1, Variations on the name Abegg at just 20 years old, playfully translating the last name of the dedicatee - Mademoiselle Pauline Comtesse d'Abegg - into musical pitches [A-Bb-E-G-G] from which his theme begins.
Of the three composers here, Liszt became the most idolized pianist-composer of the nineteenth century. His Ballade No. 2 in B minor recalls works by Chopin and Schubert, while his transcription from Wagner's opera Tristan und Isolde, demonstrates his influence by the composers he admired.

Chopin's Grande Polonaise was originally written for piano and orchestra and was premiered coupled with the opening Andante Spianato: but two years later Chopin re-arranged the work for piano solo, which we hear here. Also featured on the album is Chopin's Ballade No. 4, Op. 52, one of his most profound compositions. Chopin wrote this melancholy masterpiece at a time when he was in a state of precarious health.

This season, Alexandra made her Carnegie Hall debut in New York and appears in London with the Royal Philharmonic Orchestra playing both Rachmaninov and Greig concertos. Born in Romania, Alexandra subsequently studied at the Royal Northern College of Music, completing further studies at the Guildhall School of Music and Drama where was made a Piano Fellow.