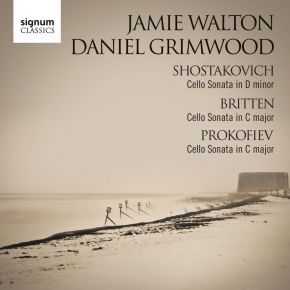 Jamie Walton and Daniel Grimwood continue their performance partnership with this recording of sonatas for cello and piano by Shostakovich, Britten and Prokofiev. Both Walton and Grimwood are accomplished performers who regularly work together both on disc and in concert, as well as being highly active in the wider musical world. A recent highlight for Walton is his North York Moors Chamber Music Festival (where both he and Grimwood performed), which was nominated for a Royal Philharmonic society award in 2011.