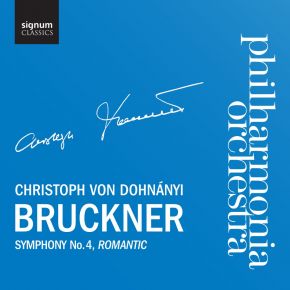 Continuing a series of live orchestral releases with the Philharmonia Orchestra, on this new record Christoph von Dohnányi leads a performance of Bruckner’s Symphony No.4, Romantic.

Bruckner stands out from other 19th-century symphonists; his large-scale works demonstrate a unique fusion of conservative and radical elements, notably influenced by composers such as Wagner and Beethoven. He appended not only the title 'Romantic' but even included a programme for the Fourth Symphony, sometime after composition. Though he later withdrew it, the scenario is a mediaeval Romantic ideal, where knights awaken to the sound of horns, rejoice and repair to prayer, before the inevitable hunt and ensuing festivities.