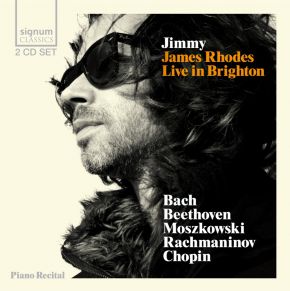 In 2008/09 James Rhodes saw his profile go from complete unknown to rising star, attracting celebrity followers including Stephen Fry and Sir David Tang. He swiftly went on to headline London's historical Roundhouse, where he was the first classical pianist to perform since it's re-opening.

In 2010 he made his television debut in the BBC Four documentary Chopin: The Women Behind the Music and in 2011 James went on to present and perform in his very own television series James Rhodes: Piano Man on Sky Arts.

This new album – recorded live at The Old Market theatre in Brighton – captures the energy of Rhodes in concert as he performs and entertainingly discusses works by Bach, Beethoven, Chopin, Rachmaninov and more in this 85-minute programme.

"Performances of such natural ease and brilliance that no one can resist." Roundhouse concert review 15th May, Geoff Brown, The Times

"This is impressive, conveyed with conviction and dazzling technique." Ivan Hewett, Daily Telegraph

"From the outset, it is evident that Rhodes is a thoughtful and attentive pianist." Richard Whitehouse, International Piano Magazine