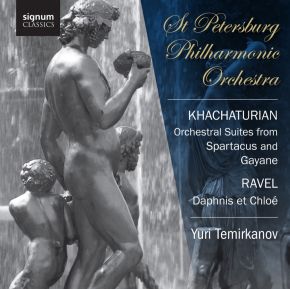 Orchestral Suites from Spartacus and Gayane

The St Petersburg Philharmonic Orchestra are one of the classical world's most popular touring ensembles, bringing an inimitable style and character to their performances under the direction of Artistic Director and Chief Conductor Yuri Temirkanov.

This recording presents works from two very different composers, both united through their mastery of orchestral colouring and evocative imagery: Khachaturian's Spartacus and Gayane suites are infused with enchanting Armenian influences, and enjoyed a deserved popularity with Russian audiences that helped protect him from the worst of widespread artistic suppression during the era. Following these, one of the jewels of orchestral repertoire, Ravel's Dahpnis et Chloé was composed for Diaghilev's Ballet Russes dance company and has remained a popular work to this day.