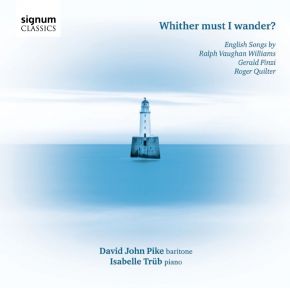 Centred around Vaughan Williams' Songs of Travel, this collection of English song brings together three now influential figures in the world of British music – Vaughan Williams, his contemporary (in age rather than compositional approach) Roger Quilter, and the younger Gerald Finzi (whose work Let us Garlands Bring was composed to mark Vaughan Williams' 70th birthday). The texts used are drawn from a variety of source: from traditional 'Dorset' songs, through settings of Shakespere, to the central song-cycle of poetry by Robert Louis Stevenson.

Baritone David John Pike has a widely varied repertoire covering early music, oratorio, symphonic, opera and commissioned works. In his native Canada, in the UK and across Europe, he has worked with leading ensembles including Glyndebourne Festival Opera, Academy of St. Martin-in-the-Fields, London Philharmonic and the Schweizerkammerchor under the direction of Christophers, Dutoit, Jurowski, Marriner, Mehta, Rattle and Zinman. He now has a growing reputation as an operatic and concert soloist.