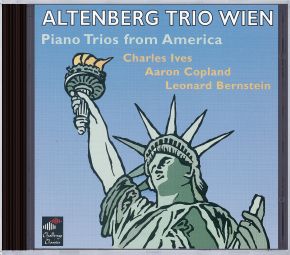 Charles Ives wrote his only piano trio between 1904 - 1911, claiming that most of the work was done on the trio during the first year and that it was revised in 1911. This trio is a perfect example of the musical characteristics that set Ives leagues apart from virtually every other composer in the classical music world. Perhaps the most distinguishing element of Ives' work is his unique ability to use well-known American folk tunes, anthems, and church hymns, transforming them through various methods into creations that are unmistakably his own. Countless musical phrases and familiar melodic fragments emerge from the three movements that comprise the trio.
The first movement begins in an atypical way -- rather than all three instruments combining from the start (as most piano trios would), the piano duos with cello and then with violin. The piano part sounds disjointed, leaping around and creating dissonance with the somber, lyrical melodies in the strings. There is no obvious time signature in either part and the parts do not necessarily match up rhythmically. This creative use of meter and rhythm is another defining characteristic of Ives' work. After some time, all three parts combine, each playing their own distinct material, and the result is intense and dark although the ending chord in this movement is perfectly harmonious, a major triad.
The title of the second movement is "TSIAJ," an acronym meaning "This scherzo is a joke." It is romping and playful, built on many popular tunes of the day, including fiddle tunes, Long, Long Ago (a folk tune), My Old Kentucky Home by Stephen Foster, fragments of Dixieland, and virtually countless more tunes. These tunes are cleverly layered on top of one another, existing simultaneously in various keys, time signatures, and rhythms. The end result is a cacophonous and boisterous hysteria through which, amazingly, one can actually distinguish the various familiar tunes.
The final movement of the trio is a moderato like the first movement, although the musical content is quite different. The melodies are lyrical and expressive, but not nearly as somber as those in the first movement. The melodies often sound more classically influenced here than in the other movements. The cello melody at the beginning, which recurs throughout the piece, sounds almost like a hybrid of two melodies from the Chopin and Mendelssohn (D major) cello sonatas. The three instruments complement each other well in this movement despite the composer's combination of various melodies. There are, predictably, sections of discord (thanks to Ives' frequent use of polytonality), and in the end the piece resolves with the hymn Rock of Ages. This beautiful melody is introduced by the cello then picked up by the violin, with a piano accompaniment that, because of its key, creates chords against the melody that almost sound like the beginning of a Gershwin prelude. The piece ends quietly, bringing a surprisingly tranquil close to a piece that is anything but tranquil.

Aaron Copland's piano trio Vitebsk (1928) is a powerful, challenging work that dates from the early "austere" period of the composer's development, which saw the creation of sparse, often strident works like the Piano Variations (1930) and the Symphonic Ode (1927 - 29). Unusually for Copland, Vitebsk incorporates quarter tones into its fabric and, further, represents the only instance in which the composer makes direct use of musical materials that reflect his Jewish heritage. Copland's goal was to portray Jewish life in the shtetl (village) amid relentlessly harsh conditions; accordingly, the harmony and texture have a gruff, spiky quality that gives the work its distinctive sound.
The opening section poses quarter-tone passages in the strings against stark, unyielding piano chords in an evocation of the shofar, the ceremonial ram's horn blown in Jewish services, notably during the Days of Awe. Eventually, the cello introduces a folk theme that originated in Vitebsk, the White Russian home town of the playwright Shmuel Ansky. (Copland later noted that he had heard this tune in a New York performance of Ansky's play The Dybbuk.) The violin and piano imitate some of the tune's motives in harsh, uncompromising statements, after which the opening shofar evocation returns. The tempo eventually quickens to a fast, frenetically driven dance featuring virtuosic runs and further motivic development. As the work draws to an end, the tempo reverts to that of the opening as the strings and piano answer one another in passionate melodic declamations. The opening shofar figures return, along with a final statement of the folk song theme.

Bernstein composed the trio opus 2 in 1937. The first movement (Adagio non troppo - Più mosso) is a polyphonic fantasy, which has a brass band-like seventh interval characterised fugatotheme (the "idée fixe" of the whole work) that is introduced and accompanied by two lyric subthemes. Between the fuge parts are overconfident-chatty homophonic parts, which give the movement a burlesque tone as a consequence of the contrast between the melancholy of the subthemes and the heroics of the main theme.
This burlesque sound blooms completely in the next Scherzo (Tempo di marcia). The intentional blending of american, spanish, prussian to a grotesque march parody reminds of the musical impudence of the twenties like Shostakovich, Prokofiev and Casella. The modern city seems to reflect itself in cosmopolitan and nonchalant clownerie.
The last movement (Largo - Allegro vivo e molto ritmico) starts with a slow introduction, where the fugatotheme of the first movement reappears. In the main part the coloristic eclecticism of the second movement reappears and is developed: very prominently appears a russian chorus theme with typical odd bars. Also the iberian mask from the march reappears, this time not rhapsodic anymore as there, but with the dancing emphasized, archetypical game of 3/4 and 6/8 bars. Two subthemes complete this rich movement, in which the exposition immediately and totally without a shortened reprise with new themes order follows. In the coda remains now the "spanish" ostinato-rhythm, so that the cello is able to lead the fugato brass band to victory the loneliness. The spanish people give way, become silent ... There falls the supposed victor from his horse - and the impudent dancers have the last laugh.