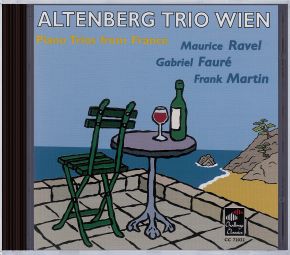 Maurice Ravel - Trio in A minor for Piano, Violin and Violoncello

The list of twentieth century piano trios may be short, but it contains several gems. One of the most precious is the brilliant specimen written by Maurice Ravel in 1914, shortly before he temporarily abandoned life as a musician to serve as a driver for the French army. The Piano Trio in A minor is a true sonata for three players, rich in the harmonic and textural innovations Ravel had accomplished in the prewar years, but ultimately, and very possibly more significantly (Ravel certainly felt so), composed around balanced, quintessentially Classical patterns.
The trio has four movements: Modéré, Pantoum (assez vif), Passacaille, and Final (animé). The first movement is a strikingly new variety of sonata-allegro form. The first theme, announced by the piano in pianissimo parallel chords at the very opening of the piece and then taken up by the strings in octaves, is like a shadowy recollection of something out of Basque folk music. Its unusual ostinato rhythm seems to echo in the mind's ear even after Ravel has moved on to the Plus lent qu'au début second theme -- a second theme that is very unusually set in the same key as the first. (Ravel makes sense of this atypically tonic-saturated exposition by ending the movement not in the tonic but rather in the relative major, C.) A brief development makes way to a truncated recapitulation which in retrospect seems but a preface to an extended coda in which the ostinato's first idea lingers in the lowest bass of the piano until at last it becomes a faint, colorless drone that dies away into nothingness. This is a remarkable movement that deserves its reputation as a masterpiece.
The second movement is a playful scherzo that will likely sound the most typically French to most listeners. The Passacaille is of course a passacaglia, taking a slow, winding eight-measure pattern as the material to be repeated; the repetition is not strict, and soon a second thematic notion worms its way into the movement, helping to build a massive climax.
Ravel's love of shifting meters is put on display in the quick-paced Final, with contrasts between 5/4 / 7/4. Again sonata-allegro form shapes the course of the music, seeping through the cracks of what might at first seem to be a more freely composed exhibition of instrumental passion -- and the closing bars, filled with shimmering, never-ending trills from the strings and a wild whoosh or two from the piano, are certainly passionate.

After an award of the Légion d'honneur and some gentle prodding, Fauré -- now completely deaf -- gave up his directorship of the Paris Conservatoire on October 1, 1920. On the second day of 1922, with the triumph of his Piano Quintet No. 2 the previous spring fading into memory, he wrote to his friend Fernand Bourgeat, "I feel dreadfully the onset of old age and I regret not finding my freedom sooner...I've done good work even so. I've finished a 13th nocturne." In March, from Nice, he wrote to his wife, "I'm doing absolutely nothing and haven't thought of two notes worth writing down since I've been here. Have I come to the end of my resources?" Jacques Durand, his publisher, had suggested in January that he compose a trio for piano, violin, and cello, but Fauré would not take up the challenge until April in Paris. Staying at Argèles through July to revisit childhood haunts, he asked that sketches for the Trio be sent after him -- only to contract bronchial pneumonia near the end of the month. By mid-August he was back in Annecy-le-Vieux, in Savoy, where the Piano Quintet No. 2 had taken shape over the summers of 1919 and 1920. "I've started a trio for clarinet (or violin), cello, and piano," he wrote to his wife on September 26, 1922. "The trouble is that I can't work for long at a time. My worst tribulation is perpetual fatigue." Returning to Paris for the winter, he completed the Trio in mid-February 1923. Durand published it the same year as a Trio for piano, violin, and violoncello, probably with the composer's assent -- the violin part contains passages of double-stopping -- while the idea of using a clarinet seems to have quietly fallen by the wayside.
Despite its small scale and general restraint, much happens in the succinct opening Allegro ma non troppo. Two long-breathed melodies -- the first wavering between elegy and lament, the second trailing a childhood memory of distant bells -- receive a replete exposition and contrapuntal development, with a new exposition (rather than a recapitulation) and development rounded with a coda of defiant despair. The Andantino, the most extensive of the Trio's three movements and the one with which Fauré had begun the composition, opens with a fiat of the most lambent lyricism shared by violin and cello, answered by a piquantly harmonized, heart-stopping melody on the piano from whose interplay he spins a delicate, exquisitely modulated, but puissant pathos. Much has been made of the resemblance of the Finale's opening rappel à l'ordre and the cry "Ridi, Pagliaccio" from Leoncavallo's Pagliacci (e.g., "La commedia è finita"). Tempting as that may be, an allusion was unintended. More remarkable is that the phrase, several times repeated, introduces an elegantly rumbustious, thumpingly accented, plein air rustic dance -- a last surprise from the old magician. The premiere was given at a concert of the Société Nationale de Musique on May 12, 1923, by Robert Krettly, violin; Jacques Patté, cello; and Tatiana Sanzévitch, piano.

In the years 1920-1930 Martin experimented with ancient, Indian, and Bulgarian rhythms as well as with folk music. His Piano Trio on Irish Folktunes is a product of this experimentation. There is a story on the composition of this work. One day in Paris Martin met an American with Irish roots who was a music-lover. He requested Martin to write a piano trio for him and to use for it some Irish popular melodies. The composer agreed and studied collections of Irish authentic folksongs at the Bibliothèque Nationale in Paris, choosing for his trio, some little-known melodies, elaborating them artfully in his work. The American, however, did not appreciate the original way and style of Frank Martin's composition and withdrew his commission!
The first movement is based completely on a rhythmical progression, which is achieved with a stepwise accelerando, so that tempo becomes quicker with the entrance of every new musical thought. In this movement the return of themes plays no role - it is the rhythmical interrelationship between the various presented melodies which form the unity of the movement.
In het second movement one will recognise a bigger thematic unity thanks to the return of a melody, this melody appears always in the same form, register and tonality, while the melodic and rhythmical background keeps changing.
The engine of the third movement, Gigue, is not an accelerando anymore, but the enrichment of the rhythmical texture by superimposing different motives. Here one can follow the metric independence of the individual voices of the trio even better as in the preceding movements.
Tu summarize: this trio doesn't require a lot from the harmony and polyphonic principle of imitation, but demands everything when it comes to rhythm and melody, which is the core of Irish singing and dancing.