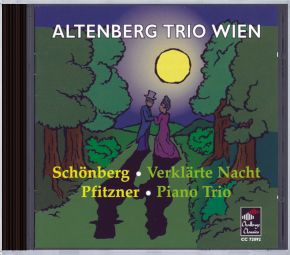 “Hans Pfiitzner’s noteworthy Piano Trio No.2 in F Major, Op.8 was composed during 1895-96 and was published in 1898. Though not particularly easy, it is not beyond the reach of accomplished amateur players. Every Music Society and Concert Series will garner considerable praise and honor for programming this ourstanding late romantic era work on their concerts. Interestingly, a side theme from the first movement (a waltz from, at the time, Puccini’s little known opera La Boheme) is used throughout all four movements of the trio as a binder link, that is to say a leitmotiv, The first movement, Kräftig, feurig, nicht zu schnell (powerful, fiery, not to quick), is so stormy and turbulent that one barely notices the aforementioned side theme. In the slow second movement, Langsam, Pfitzner, harks back to the music of the past for his source of inspiration. This leitmotiv is least recognizable in the third movement, Mässign schnell, etwas frei im Vortrag (moderately quick, but not in strict time), which is a cross between a humorous scherzo and a capriccio. The finale begins Rasch und Wild (fast and wild) but soon the leitmotiv appears and leads to a slow fugue. Several dramatic episodes follow wherein the leitmotiv is clearly recognizable. As the trio reaches its stormy conclusion, the composer shifts into an extensive slow and effective coda.”—the famous chamber music scholar Wilhelm Altmann writing in his Handbook for Piano Trio Players.

Hans Pfitzner (1869–1949) was born in Moscow of German parents. His father was a professional violinist and he received violin lessons from his father. Later he studied piano and composition at the Hoch Conservatory in Frankfurt. He enjoyed a long career as a conductor and teacher. His music was held in high regard by contemporaries such as Richard Strauss and Gustav Mahler. Pfitzner was an avowed opponent of the Second Vienna School with its serialism and atonal music. Instead, he sought new paths for traditional tonality. He composed in nearly every genre and is best known for his operas. He did not ignore chamber music, writing a number of string quartets, two piano trios and a piano quintet.

Originally Schönberg composed Verklärte Nacht for string sextet. On this album you can hear this famous work in an arrangement for piano trio made by Eduard Steuermann.

The description of Verklärte Nacht is written by Therese Muxeneder:
http://www.schoenberg.at/index.php/en/joomla-license-3/rverklaerte-nachtl-sextett-fuer-2-violinen-2-violen-und-2-violoncelli-op-4-1899