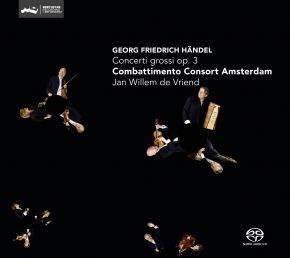 In the first decades of the eighteenth century, London was one of the most important European music centres. There was a rich courtly life as well as a great deal of music-making among the bourgeoisie. Just like Amsterdam, London was a hub of music publishers and instrument builders. London’s musical life had a strong Italian orientation. It was mainly the Italian composers who were successful there, especially Arcangelo Corelli. Although his oeuvre is limited to instrumental music and only has six opus numbers, his influence was considerable. For example, the London-based Italian Francesco Geminiani made orchestral arrangements of Corelli’s violin sonatas opus 5. Geminiani’s Concerti grossi opus 1 and Corelli’s own Concerti grossi opus 6 were published in many different arrangements. Born in Halle, Germany, composer George Frideric Handel started in his hometown as an organist, and settled more or less permanently in London in 1717. By then he already had a career in Italy, where he was very successful as a young composer and kept company with the likes of Alessandro and Domenico Scarlatti. Handel saw himself primarily as a composer of vocal music. He had written several operas, which had been performed to much acclaim in Italy and Germany. His first opera, Almira, which has Italian as well as German arias and recitatives, was premiered as early as 1705 in Hamburg. In Italy he learned a great deal about opera from Alessandro Scarlatti, and audiences in that country were wildly enthusiastic about his operas.

In London, Handel built a true opera empire. He was not only the composer and conductor of the performances, but also manager and theatre director. He headed the Royal Academy of Music, an initiative of several wealthy royal opera lovers. The first years, Handel was the big musical attraction of London, and it seemed as if everything he touched turned into gold. If one opera wasn’t quite successful, there would soon be a new one that would be. Handel was also good at getting the best Italian sopranos and castrati to work with his company.

The tide turned around 1730. Some of Handel’s works flopped, including Lotario from 1729, for which he had high expectations. He also faced heavy competition from another opera company. All of a sudden the English had had enough of the long virtuoso arias Handel wrote, and he ended up in a financial crisis.

His publisher John Walsh advised Handel to start writing instrumental music, given that there was an enormous market for it in London. In 1730, without the composer’s knowledge, Walsh published a collection of twelve sonatas that was avidly sold. There was much music-making in London in small circles on all kinds of instruments, and wealthy citizens who could afford instruments and sheet music were also interested in musical novelties. Because Handel had been so popular in London as an opera composer, much money was to be made in sales of his chamber music. After all, London audiences were not so much saturated with the composer himself as with the Italian Opera Seria genre.

With his Concerti grossi opus 3, published in 1734, Handel proved to be a master in this instrumental genre for larger settings too. It seems that in these concerti as well as in the organ concerti opus 4, Handel interpolated a break between two important compositional periods of his life: the Italian operas (until about 1730) and the large English oratorios (starting in 1739). The most salient aspect of these concerti is the way in which Handel used existing vocal works. Using existing material was certainly no admission of weakness on the part of the composer: nearly all his contemporaries did it to some degree. And thus in his Concerti grossi opus 3 Handel incorporated parts of this first oratorio Il Trionfo del Tempo e del Disinganno (concerto no. 1), Brockes’ Passion (no. 2), several of his Chandos Anthems (nos. 3 and 5) and the opera Ottone (no. 6). The fourth concerto, which starts with a stately Frenchstyle overture, is the only one in the series that was written by Handel as one whole, in other words not based on parts of older compositions. It was not entirely new either, because Handel had already used it once as an instrumental interlude in his opera Amadigi. When, starting in 1739, Handel was enjoying success in London with his large English oratorios, he used the concerti grossi again as interludes in oratorio performances. Just like Bach, who wrote his Mass in B Minor almost entirely on the basis of music from his secular cantatas, Handel was a composer who dealt with his material in an economical fashion.

In his Concerti grossi opus 3, Handel makes optimal use of the possibilities of the genre. A feature of the concerto grosso is that the orchestra consists of a solo group, the concertino, and a tutti group, the ripieno. Corelli and Geminiani used two violins and a cello as concertino, and Handel did the same in his twelve Concerti grossi opus 6 from 1739. In the opus 3 however he varies the concertino per concerto. The oboe is the main solo instrument, even more so than the violin. A concertino for two oboes and bassoon forms the counterpart to the string concertino of two violins and cello. In the third concerto we also hear an important flute solo, and the sixth concerto ends with a section for solo organ. In this way, these concerts already anticipate Handel’s organ concerti, given that these are also works he used as instrumental intermezzi in his oratorios – in which he naturally played the organ part himself.

There are also remarkable combinations of solo instruments, such as oboe with two recorders and oboe with two cellos in the second concerto. With respect to form too, Handel moulded the genre of the concerto grosso. He created a synthesis between the various national styles, with a multicoloured variety of French dances and German fugues in ever-changing orders per concerto. But the ultimate Italian example, in this case Arcangelo Corelli, is never too far-removed from Handel’s Concerti grossi.