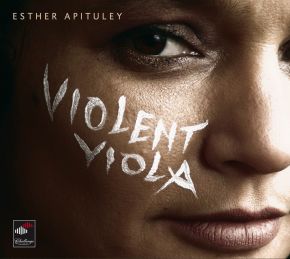 I wrestle with my viola as if it was my life.
It is true that the viola chose me. Not the other way round.
And over time we have built up a history together. Played nearly all over the world and in the crazi- est places, on the roof of a supermarket, in the air over a desert, and in a lavatory... And so we have become so entwined with each other that you’d need a saw to separate us. What drives my life, what sometimes becomes a battle, also drives my music, and so that too leads to conflict. To con- quer that inexpressible something, to approach the essence, to create musical moments... which are indescribable. It is almost addictive, or maybe it is also a kind of mission, to want to experience those moments again and again, and share them with an audience.

I have a positive attitude. If something goes wrong, I think that it must be for a reason.
And often it’s true: the grief that filled me when my father died could change to joy because I real- ized that he had taken everything he could take from life. A man of tremendous mental strength, that is what he was. He could take pleasure in the briefest moments of existence, even just before he died and could no longer drink on his own. When he took a straw in his mouth, he bit on it or blew into it. When he finally felt a little moisture on his lips, I saw his eyes sparkle. He sighed then, and said: “ how wonderful...”, squeezed my hand, and looked at me with his little dark eyes, totally happy.
Esther Apituley

(New) Talent gets a chance via CROWDFUNDING

At Challenge Records International we are always looking for great new talent and the opportunity to explore and create new music. We have two artists who really want to start recording a brand new album, one of them a brand new edition to Challenge, and we support this action!  Cappella Pratensis started their campaign at the beginning of January and are already turning to 4000,- euro's! Thanks to all the supporters for ...