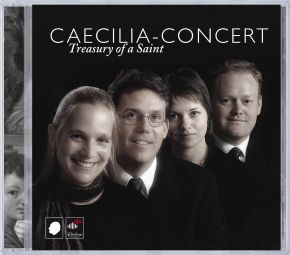 On this CD “Treasury of a Saint”, The Caecilia-Concert presents a varied selection of pieces composed during the 17th century in different styles, originating from different countries, and arising from different currents in Christianity. what these pieces have in common is their instrumentation. As a result of the unique make up of The Caecilia-Concert, we are able to play them on the instruments on which they may have been played in the 17th century and often were.

These compositions can be roughly categorized into three genres that existed alongside each other: vocal polyphony, diminutions based on vocal music, and instrumental music. The three wind instruments: cornetto, trom- bone, and dulcian, alongside the organ, were often used in the 16th century as additional support or as replacements for voices in vocal polyphonic music. Included on this CD are a few vocal works performed instrumentally. [7, 17, 18]

As the 16th century progressed, the orna- mentation used by the instrumentalist to decorate this vocal music became increas- ingly more extravagant and virtuosic. Out of this arose the development of a new genre towards the close of the century: the dimi- nution. players took an existing madrigal by a composer, such as palestrina for example, selected one voice that was then to be orna- mented, and performed the decorated voice with a continuo instrument such as an organ, lute, or harpsichord. These dominant voices were frequently written out. The result was one composition at the hand of two compos- ers: the composer of the madrigal and the composer of the diminution. [12, 15]

The third genre, instrumental music, is con- nected in degrees of importance to the rise of opera, and therefore to the development of monody and the use of a basso continuo instrument as accompaniment for one or more solo instruments. This led in the 17th
century to an explosion of compositions for instruments that previously were used for the accompaniment of singers. The compos- ers were quite often players and the players frequently composers. As a result, they knew better than anyone else the technical pos- sibilities and limitations of their respective instruments. The harpsichord proved itself to be an ideal continuo instrument but rapidly developed into a sought- after vehicle for solo repertoire.