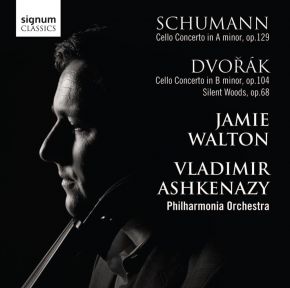 Jamie Walton is joined by the Philharmonia Orchestra under the baton of their conductor laureate Vladimir Ashkenazy for this new concerto recording of concertos and orchestral works by Dvorák and Schumann.

Jamie Walton has proved himself as a leading light in UK's musical life; as a performer in his widely praised concerto and sonata recordings, and as a festival director in his work as founder of the North York Moors Festival, which was shortlisted for an RPS Award in 2011.