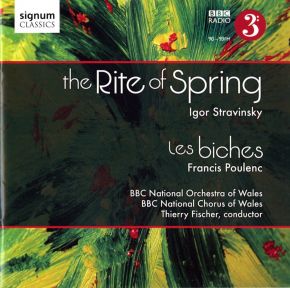 The conclusion to a three part-series of Igor Stravinsky's ballets from Sergei Diaghilev's Ballet Russes (following records of The Firebird and Petrushka), performed by BBC National Orchestra of Wales under Thierry Fischer. These recordings capture the excitement and vibrancy of the BBC National Orchestra of Wales in live performance at their home of BBC Hoddinott Hall, Wales. Almost no musical work has had such a powerful influence or evoked as much controversy as Stravinsky's ballet score The Rite of Spring.

The work's premiere on May 29, 1913, at the Théatre des Champs-Elysées in Paris, was scandalous. The ballet tested the patience of the audience to the fullest with outrageous costumes, unusual choreography and a bizarre story of pagan sacrifice. This album also features Francis Poulenc's ballet Les Biches, premiered at the Ballet Russes in 1924. Originally commissioned by Diaghilev to write a piece based on Glazunov's Les Sylphides, Poulenc instead chose to base his piece on the paintings of Watteau that depicted Louis XV and various women in his 'Parc aux biches'.