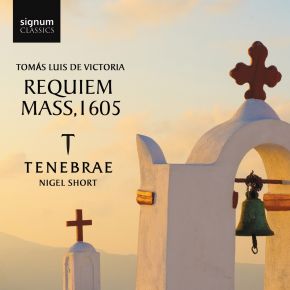 Tomás Luis de Victoria's requiem mass for six voices, written in 1603 and published in 1605, is a masterpiece. It is one of a handful of large-scale works which enjoys mainstream appeal in the 21st century. For many, it represents what Renaissance polyphony is, what it sounds and feels like, and how expressive it can be. The album also features two well-known works by Victoria's contemporary Alonso Lobo.


"Victoria’s Requiem Mass is one of the acknowledged masterpieces of Renaissance choral polyphony, and Tenebrae here exquisitely conveys the flowing relationships between its six voices." The Independent

"Tenebrae’s performance, directed by Nigel Short, is gently sustained, immaculately balanced and wrapped in a luminous acoustic … If you have ever developed a resistance to Renaissance polyphony, this could be the disc to make you think again." The Financial Times

"They are perfectly tuned … and one is rarely aware of intrusive individual singers. The acoustic has a long echo, but the sound is kept nicely in focus. This recording does justice both to the genius of Victoria and to the musicality of Tenebrae." Recording and Performance BBC Music Magazine Choral & Song Choice, June 2011