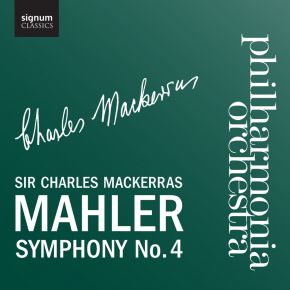 Recorded at the Queen Elizabeth Hall in February 2006, the next record in Signum's series of live orchestral recordings with the Philharmonia features the late Sir Charles Mackerras conducting Mahler's Symhpony No.4. The concert was a memorable one, as this review demonstrates:

"This performance was inspired and interesting ... Setting off at a no-nonsense, fastish speed, Mackerras's appreciation of the numerous changes of tempos was a miracle of refined music-making that enhanced the rustic joys of the first movement. What impressed so much was the innate humanity of this music that in other hands can come across as insincere sentiment that lies behind the notes; the slow movement in particular was of a poise and serenity that was truly touching. The singing of Sarah Fox in the finale embellished the entire sense of naturalness that was enshrined in this memorable rendition, a triumph for the partnership of the Philharmonia Orchestra, on riveting form, and the venerable Mackerras." Edward Clark, ClassicalSource.com, Feb 16th 2006