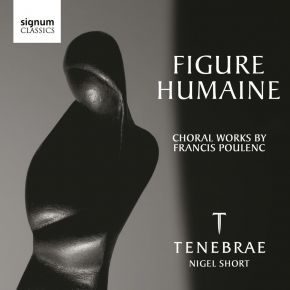 Francis Poulenc is now considered to be among the most important composers of choral music of the 20th Century. Yet his early career reveals no trace of the dazzling and idiosyncratic unaccompanied choral textures so abundantly produced in the second half of his life.

This new collection of Poulenc's choral works is centered on his masterwork, the Figure Humaine. Even though it is only 20 minutes in length, the work is a supreme test of stamina, technical agility, range, aural skill and musicianship. The professional chamber choir Tenebrae (directed by former King's Singer Nigel Short) are more than capable of tackling this repertoire, and this disc promises to provide a new benchmark in interpretations of the work.