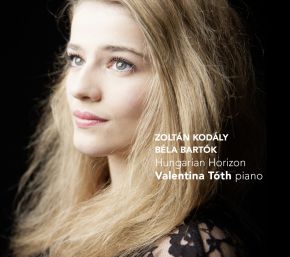 “Music is a language everyone understands. When you communicate through music, there are no misunderstandings, there is no confusion.” That could be the artistic motto of Valentina Tóth (1994) – a young and highly promising pianist, a multi-talent who sings, dances, acts and plays the piano at an exceptionally high level. In 2009 she won first prize in the Princess Christina Piano Competition and her career has been on the up and up ever since. Skyrocketing. She is currently studying at the Royal Conservatory in Brussels, but already she has been on the stage at Carnegie Hall, and April 2013 Challenge Classics released her first album.

Valentina's grandfather immigrated from Hungary to the Netherlands. At young age Valentina discovered within herself a deep connection with both old Hungarian folksongs and music of Hungarian composers. The deep emotions in this music inspired her to play the works of two great Hungarian composers for this album, Bartók and Kodály. It challenges her to make the different voices and colors of an orchestra sound through the piano and to express great and tiny feelings in this classical 20th century Hungarian music. It’s a beautiful combination of piano music, partly inspired by the old Hungarian folk tradition.

The Bagatelles, Op. 6, written in 1908, are an important link in the work of Bartók. In them it first become clear how hard the composer was working to find his own super-personalised musical language. The work dates from the time when Bartók seriously started to collect and document Hungarian folk music. Bartók was able to take something that had been around ages (Hungarian folk music) and make something entirely new out of it.

Tóth combines the Bagatelles and the Three Folk Songs from Csík (now Ciuc in Romania) by Bartók with the Seven Piano Pieces, Op. 11, and the Dances of Marosszék by Kodály. Kodály based the latter work on melodies and dances he had collected in the Marosszék region in Transsylvania, Romania. He originally wrote this fairy-tale-like music – nowadays seldom heard in the concert hall – for piano, and later adapted it for orchestra.

Béla Bartók (composer)More information
14-12-2015 Leeuwarder Courant
"4****
["]..In a moving rendition of Beethoven's third piano concerto Valentina exposed the poetic side of this work and took the orchestra to a velvety pianissimo playing. Besides refined trills and graceful runs she shows great empathy and originality in the musical themes and played with an intensity that surprised and touched the audience.""

19-05-2014 Klara
"
It is beautiful how Valentina Toth makes great art from this close to folk music leaning minatures. "

28-10-2013 Opzij
""The 19-year-old pianist Valentina Toth brings an unconventional debut with Hungarian Horizon""
01-09-2013 Luister
"It is wonderful that very interesting music is available on CD for the first time in a long long time "
25-07-2013 Luister
"three star review    "
22-07-2013 Luister
"The unclassic, apparent vagueness was as much liberating as it was gnawing."
01-07-2013 Piano News
"clear, rich in contrast and at the same time spirited and tackeling"
12-06-2013 Audio Freaks
"With “Hungarian Horizon” Valentina Tóth made a fabulous debut that takes your breath away. Now small and emotional,  then grand and exuberant. Everything falls into place when you listen. Valentina takes you with her on a musical adventure that gets ever deeper and deeper everytime you listen to the cd."
01-06-2013 Leeuwarder Courant
""Toth uses her fantasy, has total control over the pieces she performs and achieves something that many other pianists do not achieve: her own identity combined with a strenghtening of the pieces' character.""
27-05-2013 Pianowereld
"" Valentina is only at the beginning of a, in my opinion, brilliant career." Frans Schulze, Pianowereld"
08-05-2013 www.opusklassiek.nl
""Add to this the very successful recording - pleasantly spacious and an incredible dynamic register width and color sophistication - and it is clear that we are dealing with a breathtaking CD, which makes us curious to follow the career of this highly remarkable talent""
06-05-2013 Music Frames
"Vital pieces which are beautifully performed by Valentina Tóth, which recalibrate Kodály and Bartók and make the 'Hungarian Horizon' even wider."
03-05-2013 Mania Klassiek
"Tóth's excellent play copes well with the emotional and impulsive music from Bartók and Kodály. Much can be expected from her."
01-05-2013 Pianowereld
"The CD is characterized by a mature musical approach and Hans Haffmans praised the cd during radio broadcasts both on Sunday morgen (Diskotable) and during Haffmans' mooiste. That says a lot about the musical content of this record. In my opinion, Valentina is just at the beginning of a great career."
26-04-2013 Reformatorisch Dagblad
""The fourteen short Bagatelles and Three folk songs by Béla Bartók and the Seven piano pieces plus the Marosszéker Dances of Zoltán Kodály are in turn reflective, attractive, emotional, impulsive and capricious.""
15-04-2013 Opusklassiek
""Tóth breaks a lance for works that are not too well represented in the music catalogues and in which mere cosmetic and technical brilliance does not give much solace. On the contrary, it asks for internalized and integrated pure musicality without any frills.""
12-04-2013 De Gelderlander
""I have seldom heard someone who can be so absorbed in such passionate rhythms and musical ecstasy. Goose bumps guaranteed.”"
10-04-2013 MPodia
""Although this music differs in many aspects from the ‘conventional’ western European music, Tóth knows exactly how to bring it close to her audience. Through a healthy combination of Frisian down-to-earthness and Hungarian temperament, she knows how to touch the right cord.”"
10-04-2013 Nieuwe Dockumer Courant
""In her play she was able to expose the Hungarian soul.”"
01-03-2013 Luister
"This being your first album, did you experience a significant difference between playing live and recording an album?