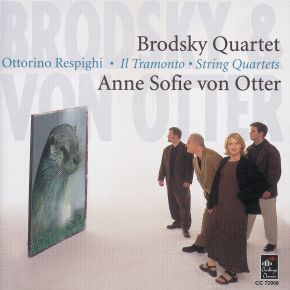 It will come as a surprise to many people that the famous orchestral composer Ottorino Respighi, known for such works as the Pines and the Fountains of Rome, also wrote chamber music. But Respighi was very interested in chamber music and wrote a considerable amount.

Respighi (1879-1936) was born in Bologna and studied violin, piano and composition at the local conservatory. Becoming a first rate viola player, he was engaged to play a season for the Imperial Orchestra in St. Petersburg where he met and subsequently studied composition with Rimsky-Korsakov. Upon his return to Italy, he took up residence in Rome where he lived for the rest of his life.

Quartetto in Re Maggiore (D Major)

Respighi composed this string quartet in 1904. This work dates from the time when the composer was a member of the Mugellini Quartet in Bologna and was first performed in 1906; it belongs to his early period (he was around 25 years old). It is in four sections: allegro moderato, tema con variazioni, intermezzo and finale. The Brodskys give a warm, open-hearted account of this section and the tempo is as indicated. The theme of the second section will be familiar to those who know Respighi’s works from this period; it has rather a sense of longing. The variations are taken up by the different instruments in turn and a mournful-sounding variation is given by the violins and viola accompanied by staccato cello. Rising and falling themes reminiscent of Puccini’s "Crisantemi" on violins feature in the third section which transforms into a rondo-like passage where each instrument successively takes them up. The last section consisting of taut allegros (which seems to presage the Violin Sonata of 1917) has separate, exuberant, solos for the violin and viola ending in a dramatic flourish Il Tramonto.

Respighi set several of Percy Bysshe Shelley's poems, but only three were set for mezzo-soprano and orchestra: Arethusa in 1910, Il tramonto in 1914, and La Sensitiva between 1914 and 1915. Of the three, Il tramonto (The Sunset) was also written for voice and string quartet, and is heard in this version as often as in the chamber orchestral version. The smaller accompanimental forces give the piece a much more intimate feeling, beautifully suiting the nature of the poem. The strings open the work dramatically, then settle down to a calm lyricism. The singer describes the "One within whose subtle being...genius and death contended." The music swells as the poem tells of his love for a Lady. It then serenely describes the field they walk through, the nature around them, and the colors of the sunset with a repeated, rounded-contour figure similar to what is found in a Field or Chopin nocturne. Very quietly, with the strings almost still, the Youth wonders "Is it not strange...I never saw the sun? We will walk here To-morrow; thou shall look on it with me." A brief interlude follows, and the nature figure returns before the music turns to hard chords as the Lady finds the Youth dead the next morning. The chords soften as the poem describes how she "died not, nor grew wild, but year by year lived on...." A lighter texture with moving musical lines underscores the poem's description of her life, with the lower strings sometimes moving in parallel lines to the voice. The Lady's final appeal for the same peace that the Youth found in death is uttered with a calm weariness before a violin solo concludes the piece in the major. The impression of the whole work is that of a romantic ballad or a tone poem in miniature, because the strings do not just provide a harmony to the voice's melody, but actually describe the text as well. The mezzo-soprano then fits in as essentially another instrument, reciting the poem in an arioso fashion. Respighi's wonderfully textured music not only convincingly evokes the scenes of the poem, but also expresses the sentiments of the two characters, revealing a more personal aspect of his talent.

This work dates from a very prolific period when Respighi was becoming internationally famous with Pini di Roma. He based the work on one of the ancient modes, Dorian (or Doric). It is played through as a single movement but this can be divided into 4 sections I. Energico, 2. Allegro moderato, 3. Elegiaco (adagio), 4. Moderato energico (Passacaglia). The Brodskys give out the (chorale) theme strongly and it is expanded and taken up consecutively by each instrument. The performance varies between strong, almost strident or harsh and changes to sweeping lyrical passages in quick succession. The scherzo section is flowing but the fugato at the end is more vivace and the players give it a kind of post-modern edge. The adagio section follows smoothly on and the Brodskys bring out the supporting parts for ‘cello and viola with darting cross movements for first violin leading the way. The finale section recapitulates the Dorian theme. The quartet is a prime example of how Respighi was so greatly influenced by music of the past as it explores the use of eight different modes throughout its single-movement structure.