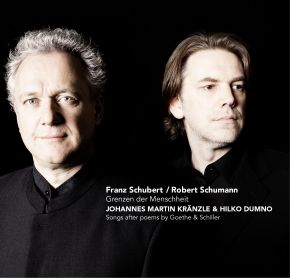 Goethe, Schiller, Schumann, Schubert – four great names and an equally great question: where do the limits of mankind lie? Johannes Martin Kränzle and Hilko Dumno try to find those limits on their latest CD with the help of the great poets and composers.

Johannes Martin Kränzle and Hilko Dumno in search of the limits of mankind with the help of Goethe, Schiller, Schubert and Schumann.

Music seems to transcend life, to transform it by means of simple physical phenomena such as the reverberations of strings and windpipes. Tones possess their own time and pitch, which we do not completely understand although we generate them ourselves. Music transcends the constraints and contingencies of our everyday existence and is nevertheless a part of them. This is known to everyone who ever surrendered to its so called “magic” – whether composers, like Robert Schumann, who was preoccupied day in day out with the detailed mechanics of effect, or writers like Johann Wolfgang Goethe, who preferred to place music in an ancillary function to the literary art.

Boundary breakers mostly act against their own well-being. They risk their life for a Glove or place it as Hostage into the hands of the enemy; they taunt Coachman Chronos and shake the gates of Tartarus ... Goethe and Schiller seem to feel that art’s very purpose is to document and imagine these ventures. What better allies could one have than music? Music fights oblivion, because the compositions of a Schubert and Schumann are able to accelerate, decelerate, stop, and even reverse conventional time. Song adds the entities of sensuousness to speech. In contrast to spoken language or prose, which reflect and constitute the functions of life, song moves in its own sphere. It connects music with speech; the sign system of language is infused with an essential property from the sign system of music: that of not being completely decypherable. The mystery of what lies beyond the pale thus remains permanently safeguarded.

With natural phrasing and vividly diction Kränzle assures not only ideal text-conprehensibility, but he also tuns into a suggestive tale-teller. He uses the wide palette of his vocal-colours wisely to trace the prevailling mood of the poems and to capture the audience's attention."

01-10-2013 Pizzicato
"the conceotion of the CD is acutely intelligent"
01-10-2013 Stuttgarter Zeitung
"Kränzle convinces with the power of his voice, he uses the vocal instrument skillfully to draw a picture of despair."
23-09-2013 www.writteninmusic.com
""And mainly in the high passages he pushes the boundaries of what sounds pleasant""
23-09-2013 Written in music
"This results in a fresh recording, even where both parties are going down at the same time."
Klassik heute
"A natural born ballad-singer, the words intelligible and expicit, the performance extremely agile."