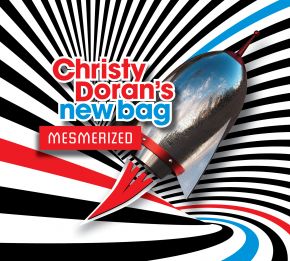 Old Bottle, New Wine: The band, which continually redefines itself, has again developed an exciting new routine, in part with new band members too:  Sarah Buechi (voice), Vincent Membrez (moog-bass-synth & rhodes), Lionel Friedli (dr) and Christy Doran (e-guitar & compositions) are starting a new era of the "New Bag". The message remains the same: intensive yearning for crazy musical adventures, and consistent resistance against any categorization! These special characteristics of the band with apparently disregard for current trends in music have not been lost, but instead reinforced. While Bruno Amstad chased his rumbling to hysterical scats across mad guitar runs, the best singer in Switzerland does that today: Sarah Buechi. Her insane leaps of intervals always land at precisely the right spot, the pictures in sounds nuzzle up to the band sound, and new tonal qualities from her rich treasure chest of Indian music complement the already very varied world of sounds. She does not lose her cool either when her co-musicians floor the gas pedal; with the primeval sound from the moog, which not only replaces the bass, but instead really perfects the sound and with which of course an unlimited number of possibilities are provided, with the typical driving force of the Fender Rhodes and added to the pulsating grooves of a thrifty but penetrating drum set and – last but not least – the weirdest riffs and runs since the invention of the electric guitar such as only Christy Doran can provide.

Christy Doran (artist)More information
17-06-2013 Le Soir
"“It is very energetic,rocked and the voice of Sarah Buechi leads you to other worlds, atmospheres.”… “ the album only counts 40 min, I would have loved to have more”"