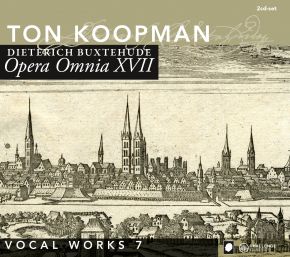 Dieterich Buxtehude’s vocal compositions represent all major genres that were current in Lutheran church music of the later 17th century. They included in particular chorale settings, concertos on biblical texts, arias on contemporary sacred poetry, dialogues, and composite forms such as concertoaria cantatas. Preeminent among them were various kinds of settings based on traditional songs from the church hymnal, i.e., “chorales” in Lutheran terminology.

Klaus Mertens (soloist)More information
01-03-2014 Classical.net
"If you have never quite got to grips with Buxtehude and want performances of his profound and affecting music that are as good as any currently available, you can rely on these recordings without hesitation."
01-02-2014 BBC Music Magazine
"Quite simply, a must-hear."
01-01-2014 Gramophone
"(...) the performances (...) clearly made with love (...)"
01-12-2013 Early Music Review
"These two discs mix the well-known with the obscure, and the small-scale with the grandiose in glorious performances that serve only to remind us what a great composer Buxtehude was, no matter to which medium he has turned his hand."
21-10-2013 www.opusklassiek.nl
""In the meantime, enjoy this latest episode that again excels in instrumental and vocal splendor on the basis of coherence, balance, diction, phrasing, rhythmic foundation, fantastic panorama that unfolds through a phenomenal insight into what was there and what was to come""