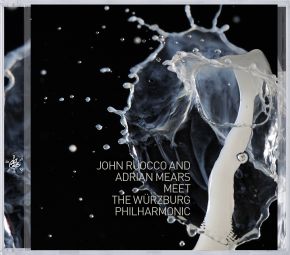 A good tradition is being continued. The Wurzburg Philharmonic Orchestra has been known to implement fruitful and successful collaborations with jazz musicians since 1994: in joint concerts with the renowned Trio On The Corner, a CD of the orchestra with the trio and star guest Benny Bailey was already released in 1997, and a recording with Charlie Mariano in 2003, which received a lot of praise in the national and international press. There were again concerts in 2010 and 2011, this time with the internationally renowned jazz musicians John Ruocco and Adrian Mears – and again with Trio On The Corner. The recording has now been carefully edited and made accessible to the general public. It was well worth the effort. We hear an orchestra that works completely relaxed and effortlessly with improvising musicians and creates a sound tapestry that does not cover, but instead invites the soloists to fly. It accompanies these journeys with a lot of sensitivity and empathy and very obviously not only supports the improvisations harmonically, but also stimulates the inventiveness of jazz musicians. As a result, genuine sound tapestries result, finely woven with numerous expressive dabs of color. The compositions and arrangements provide the rest. Standards by Billy Strayhorn and J.J. Johnson were arranged personally by conductor Jonathan Seers for the Philharmonic. Marko Lackner arranged two compositions by John Ruocco and contributed a piece of his own. In addition, there are several compositions by Adrian Mears, which he also arranged himself, and a piece by the pianist of the trio, Bernhard Pichl, also arranged personally. Ensembles have joined up here, which took off on an adventure – and completed it brilliantly!

The spiritual father and driving force behind the project is the general music director and conductor of the Wurzburg Philharmonic Jonathan Seers. The Englishman came to Wurzburg after stints in Freiburg, Mannheim and Gelsenkirchen. He found an orchestra, which not only plays at the highest level, but which is also open-minded and curious. There have not only been extraordinary projects in classic during his term of office, but also border crossings to jazz. Seers lives in Hanover, but he was able to be involved this project until its release thanks to the support of his successor Enrico Calesso.

The Trio On The Corner took part from the start and has been a perfectly matched partner for the jazz projects. The pianist Bernhard Pichl, instructor at Nuremberg and Wurzburg, among other things, has played and recorded CDs with numerous internationally known musicians from Benny Bailey to Red Holloway and from Scott Hamilton to Dusko Goykovich. Rudi Engel has been part of the group since its beginnings. He studied under Ron Carter and Rufus Reid, among others, and many know him as member of the Ernie Watts European Quartet. The youngest in the trio is the drummer Jean Paul Höchstädter, who can already look back on an impressive career. This is not only thanks to his list of musicians, with whom he has played (Nils Landgren, Till Brönner, Gary Burton, Dave Douglas, etc.), but also because he has been a member of the HR Big Band awarded the ECHO Music Prize and can be heard alongside Axel Schlosser on Double Moon Records, for example.

John Ruocco, born in New Haven, Connecticut, has lived in Europe since 1979 and for more than 10 years in Belgium. He teaches at the Royal Conservatories in Brussels and Den Haag (NL). He was a member of the Bundesjazzorchester (German Jazz Orchestra) under Peter Herbolzheimer for 20 years and director and conductor of the Dutch Jazz Orchestra. He is one of the "unsung heroes" of his generation of jazz musicians and has been inspiration and incentive for many younger jazz musicians.

Adrian Mears was born in Sydney, Australia, but already came to Europe when he was a young man. He quickly became one of the most important trombonists. You could hear him in the Vienna Art Orchestra and the bands of Carla Bley, Bob Brookmeyer, McCoy Tyner and many others. He has numerous compositions to his name, and hundreds of CDs were recorded with his participation. His captivating but always velvety-soft sound and his outstanding technique make him one of the best European trombonists.