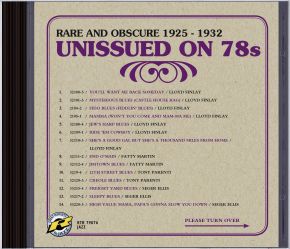 As we said on our previous CDs in this series, ‘Unissued on 78’ means just that, no more, no less. Some of the items here may have appeared on LP’s, but if so they would be 30 or 40 years old by now and collectors items in their own right. If any of our selections have been on CD before we are not aware of it, but in these days of proliferating small specialists we may well have missed something!
When Victor’s mobile recording unit arrived in Houston, Texas in March 1925 one of the bands they chose to record was led by Lloyd Finlay. Seven titles were made of which six were issued. Beyond the facts that Seger Ellis was their piano player, at least for this session and that a Jack Murhill sang on the unissued title nothing else is known about this quite interesting group, which fall stylistically somewhere between hot dance music and country (“hill-billy” as it was then termed) music. It’s possible that Murhil also played an instrument and the same could be true of Eddie Willis and ? Insurillo, who are noted amongst the writers of the recorded material alongside Seger Ellis and Lloyd Finlay himself.

Victor’s second choice for that trip was Fatty Martin’s Orchestra, a much more straight forwardly jazz based outfit than Finlay’s. Two excellent titles resulted. But although we do have a partial personnel for the orchestra, that is as far as our knowledge goes. After this one session its participants returned to recorded obscurity.

Unlike our next artist, who vies with Seger Ellis to be the only reasonably well known name on this CD. The two titles concerned were also made for Victor’s mobile unit, but in New Orleans by Tony Parenti and his Famous Melody Boys. This was their third recording session of 1925, having already made one Victor session on the previous day, and one several months earlier for Columbia, when they too, sent their mobile unit, scouting around the Crescent City.

Anthony Parenti (born New Orleans, 6 August 1904, died New York 17 April 1972) was a child prodigy, already performing publicly by age 12. Having turned down offers from The Original Dixieland Jazz Band and also from Paul Whiteman, he spent the early part of the 1920’s working for ‘Papa’ Laine’s band including playing on the Mississippi riverboats, before forming a very popular band for residency at the La Vida restaurant in New Orleans. Around 1925 he left for New York and a long and illustrious career as, among other things, staff musician for the Radio City Symphony Orchestra and for CBS. He was also active with the likes of Fred Rich, Ben Pollack, Ted Lewis and Meyer Davis. Post 1945 he became well-known to the public at large as a prominent participant in the New Orleans Revival, recording frequently with starry line-ups and leading bands at such jazz venues as New York’sCentral Plaza, Metropole and Jimmy Ryans.
Our two selections are first rate examples of New Orleans jazz of the middle ‘20s, which should take their place alongside The Halfway House Dance Orchestra, the New Orleans Owls etc.

Seger Ellis was one of several Texan musicians, (others being Gene Austin and Art Gillham) who sang in a somewhat emasculated high tenor and incongruously played stomping blues piano. He was born in Houston on the 4th of July 1904 and died there sometime in 1995. Victor were interested enough, after hearing him playing with Lloyd Finlay, to record a couple of piano solos, but these were rejected, probably for technical reasons. In August 1925 they tried again, this time in Camden, on three sessions spread over three days. Fourteen titles were recorded, but only four were issued. In the following year Okeh recorded him as a singer and occasional pianist and he became very popular, so much so that Okeh gave him his own silver and black picture label, a rare honor, and the cream of, often jazz inclined, session men to accompany him (including even Louis Armstrong on three titles - see Retrieval RTR 9962). By the late 20s he had settled into being a very acceptable baritone, and in the 30s had his own big band. After military service in World War II he went back to Houston and concentrated on composing piano pieces and popular songs, one of which, “You’re all I want for Christmas” has become a seasonal standard. We have also included here an unissued piano solo, not even titled, made for Okeh in 1928.

Kay Kyser and his “Kolledge of Musical Knowledge” rank high in the USA as a well-loved and long lasting comedy musical act. However, their very first recording made in 1929 was a typicalpiece of ‘20s ‘hot’ dance music. So far as we are aware there are no further such goodies among the dozens of Kyser recordings in the next 30 years!
Herman L. “Snooks” Friedman (born, probably Memphis, Tennessee 10 February 1906, died there 26 March 1993). A drummer, good, if a bit heavy-handed, who began playing professionally in 1923 with a band called the “Ole Miss Jesters”. Started his Memphis Stompers in 1926 and first recorded with them in 1928 as a definitely “hot” band (see RTR 79071) 8 titles were issued. In 1931, now billed as “Snooks and his Memphis Ramblers” he started a series of rather more commercially slanted recordings. For Victor, Melotone and Banner, but did not record again after 1932, though remaining active as a leader with residencies at New York’s Paramount Hotel and even at Roseland. After military service in the US Navy in WW II, he organized a new band, but never gained any kind of prominence. We have 3 of the hotter titles from 1931, made for the almost mythically rare Victor cheap label subsidiary “Timely Tunes”, quickly superseded by the very successful Bluebird label. The band is also reputed to have played on the soundtracks of several early cartoons, for the Fleischer Bros. amongst others.

Our last offerings are from the New England based “Roane’s Pennsylvanians”, who’s manager/promoter was Frank Roane (1893 - 1942) of Lowell, Massachusetts. The band made a total of 10 titles for Victor in 1932 in a “hottish” dance band style, actually already rather dated by then. However, they make very pleasant listening and we have alternate takes of 5 of them.